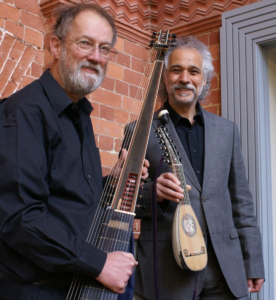 Musical treasures from the Italian baroque come to Launde Abbey on July 26th in the form of Duo Piccolo e Grande. The Lincoln and Nottingham-based musicians present a programme of rare works on equally rare instruments. Enzo Puzzovio plays mandolino, a precise replica of the ivory and ebony 1752 original in the V&A museum. He also plays an antique hurdy-gurdy and all the music is accompanied by Stewart McCoy on the theorbo.

Enzo and Stewart have been professional musicians since 1984, both as soloists and in a variety of ensembles. Stewart also teaches and edits music worldwide. Enzo has performed and recorded from the UK to the USA, from Albania to Australia. The duo frequently performs rediscovered works that have lain unplayed since the 18th century. Their concerts take them nationwide as well as for the International Lute Festival in Füssen, Germany.